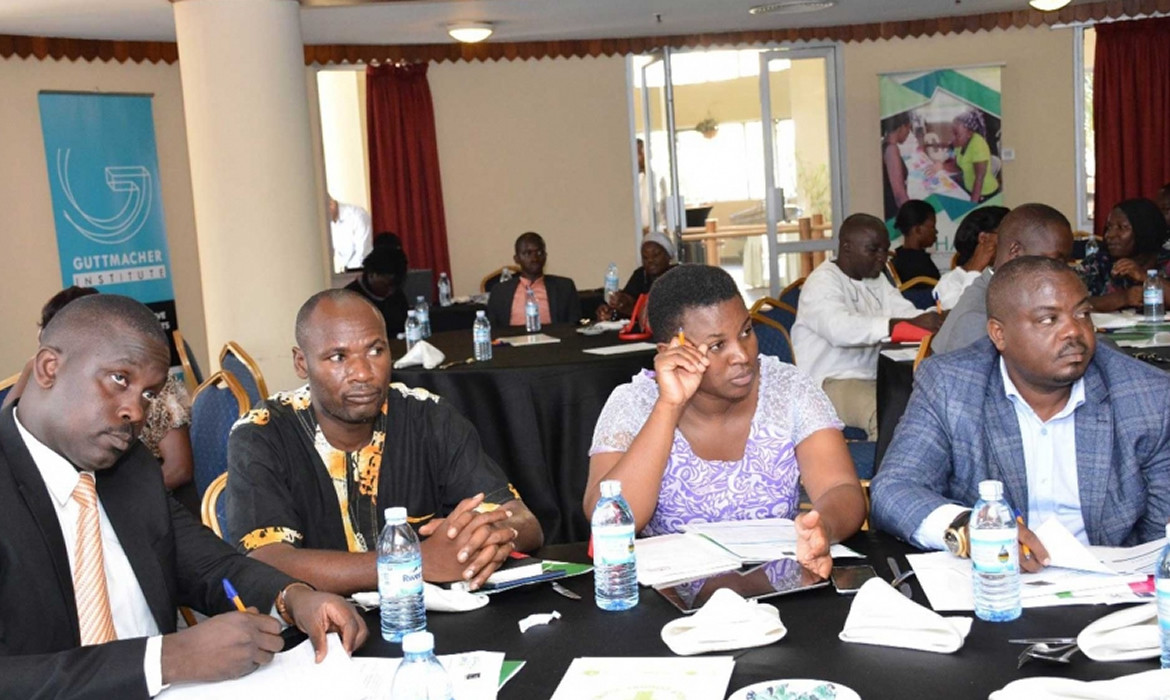 Dr Michael Bukenya (1st from the left), the Chairman of the Health Committee of Parliament, together with other legislators listening to the proceedings during the MPs’ breakfast meeting on ‘Adding It Up’ organized by PHAU and Guttmacher Institute.

Members of Parliament sitting on the Health Committee have committed to raising more attention to sexual and reproductive health challenges faced by Adolescent girls in Uganda. This was during a breakfast meeting held recently by Public Health Ambassadors Uganda (PHAU) in partnership with the Guttmacher Institute.

The meeting was held to present research findings on “Adding it up: Investing in Contraception and Maternal and Newborn Health for Adolescents in Uganda.” The research which was conducted in 2018 found out that adolescent women aged 15-19 make up almost one-quarter of the female population in Uganda, and they account for 14% of all births. The research also notes that half of the pregnancies among adolescents in Uganda are unintended and 30% of those end in abortion.

It was opened by Segawa Patrick, the Team Leader for Public Health Ambassadors Uganda (PHAU). Segawa said that the main aim of the meeting was to share research findings and key recommendations for the MPs to take action. “The overall goal is to see how we can support our MPs to tackle sexual and reproductive health issues of adolescents in our country,” he said.

These MPs included Jovah Kamateeka, Mbwatekamwa Gaffa, Spellanza Baguma among others. They were led by Dr. Micheal Bukenya the chairman of the parliamentary committee on health. Mbwatekamwa highlighted the need for more male involvement in contraception use to reduce the family planning burden on women. “As men, we need to have an alternative contraceptive method apart from vasectomy. I am willing to use it.” He said.

Hon Mbwatekamwa Gaffa speaking during the breakfast meeting on Adding It Up research findings.

Dr. Dina Nakiganda representing the Ministry of Health urged the MPs to re-examine new approaches and knowledge in adolescent health. “We recognize that some young people will choose not to postpone sexual activity so it’s our responsibility to reduce the risks associated with it.” She said. Uganda has an early sexual debut age. According to the Demographic Health Survey girls in Uganda start having sex at 16 while boys 17years.

The meeting was organized in conjunction with the Uganda Family Planning Consortium and National Population Council represented by Dr. Dorothy Balaba and Dr. Betty Kyadondo respectively. Balaba urged MPs to come up with policies that will help young people to make the right decisions for their health. “Today I am a doctor because there was someone who ensured that I did not give birth when I was still young.” She said.

Adding it up research study was carried out by the Guttmacher Institute with a goal to inform policymakers on the need to invest more in adolescent sexual and reproductive health. The breakfast meeting with MPs was preceded by a media workshop that was attended by members of the Health Journalists Network Uganda. These will be followed by National and Regional dissemination meetings which will go up to June.