The Grand Finale of the Boda Beeramu Project

The Grand Finale of the Boda Beeramu Project 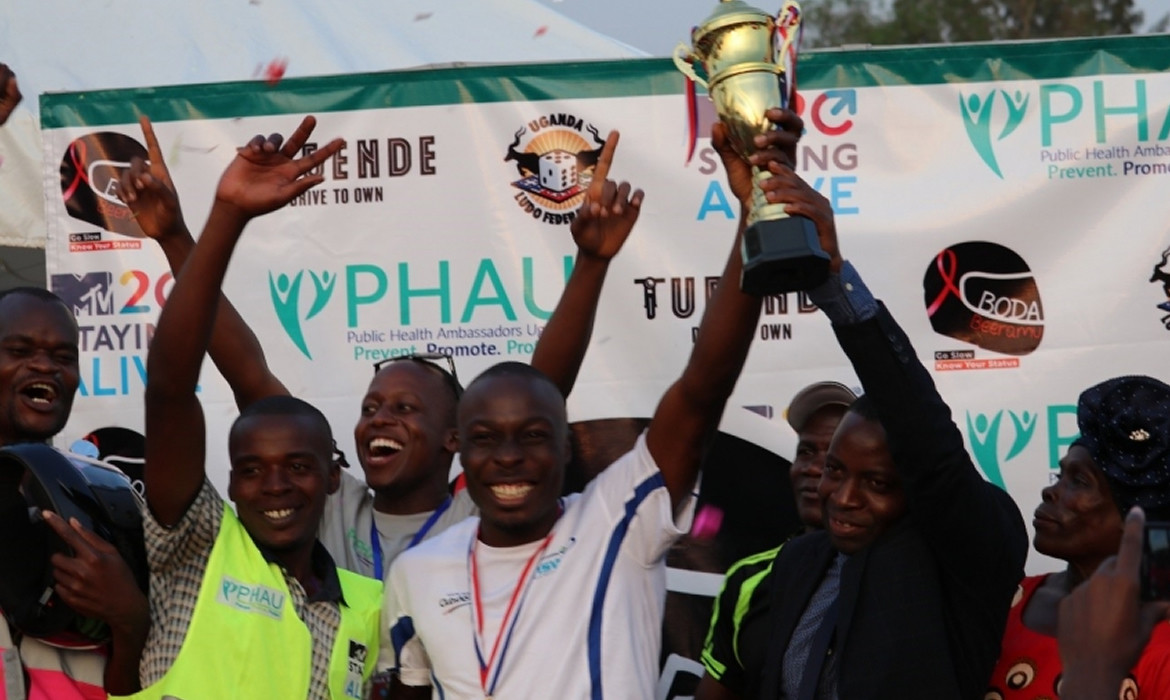 What started as a boardroom discussion that later culminated into an innovative board game based HIV/AIDS awareness project and treatment project, finally came to a grand close on Friday.

About 200 players from 28 boda stages in Wakiso district participated in the championship that was adjudicated by referees and officials from the Uganda Ludo Federation (ULF), a body that governs the Ludo game in Uganda. The games were played in a one-off knock out format starting with 2 group stages that were followed by quarters, semis and the grand finale. The championship attracted over 500 people from Nansana, Kayunga, Wakiso, Namusera and Kakiri towns.

After a tense and adrenalin arousing competition Yesu Amala Bodaboda stage was crowned champions after humbling Namusera Main boda boda stage in the finals. The winners walked away with an assortment of gifts both individual and collective. These included a trophy, golden medals, ludo boards, fuel vouchers, helmets, reflector jackets, and T-shirts.

Kalule Hussein the President Uganda Ludo Federation who was also the chief guest at the championship advised Bodaboda riders to stay clean from HIV by conducting retune testing and always know their status. “You see right now you are energetic and can roll the dice with vigor but you may not be able to do the same if you are sick. So that is why it’s very important to stay healthy.” He said. Kalule thanked PHAU for using the Ludo Game to pass on important health information to the Boda riders who also happen to be their players in the national Ludo league.

The riders were further advised not to stop at enjoying the Ludo game but also read the messages on the board and always make the bold decision to know their HIV status. “We used the Ludo game because we were confident that you would embrace it. The project may have ended but please that does not mean that you should stop looking out for your health. Feel free to call me and I will direct you to wherever you can get help.” Said Musinguzi John the Boda Beeramu Project Officer.

Boda Beeramu is a one year project that started in June 2018 with an aim to reach 2000 bodaboda riders with information and services on HIV awareness and treatment. With generous financial support from MTV Staying Alive Foundation. Tugende Uganda Limited also gave the project a push by facilitating mobilization drives for the championship.